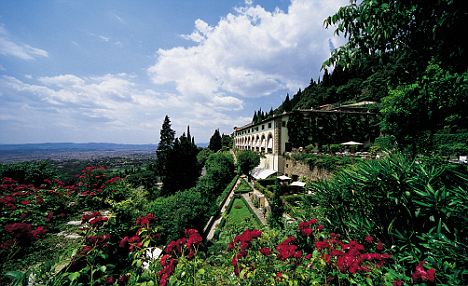 The Grande Dame of Florence’s hotels is the Villa San Michele, located a short ten minute drive from the city center on the lush hillside of Fiesole.

The original building was a monastery, founded in the 15th century  by the Franciscan monks.  The lush gardens and woodlands were donated by a wealthy Florentine family, creating a setting that served the monastic needs well.  The monastery remained the possession of the Franciscans until 1808 when monastic orders were dissolved by Napoleon and, in 1817, it returned to private hands.  In 1900, an American from New York bought the property and created large greenhouses, restored the building and landscaped the gardens.  During WWII it was badly damaged but, afterwards, was purchased and restored once again by a private owner and turned in to a hotel.  Today, it forms part of the Orient Express portfolio.

The facade of the Villa and its ancient vaulted loggia are attributed to Michelangelo.  The loggia, provides the most celebrated dining venue in Florence with its golden color and unsurpassed views of the city.  In fact, you have  wonderful views of Florence from virtually all of the rooms and suites both in the Renaissance villa and scattered throughout the gardens.  Two of my favorite rooms are the Chapel, a single suite set privately on its own in the garden, and the Limonaia, a four-bedrooms villa with its – soon to be – private swimming pool.

Yet, once again, the hotel, itself, is just the beginning of the story.  You cannot compete, anywhere in Florence, with the San Michele staff.  From the reservations managers and concierges to the waiters and maids (on of my favorite gentlemen is the lovely old man who whistles while he vacuums the rooms), the staff run this hotel like clockwork with ease, humor, and friendliness.  It is the hotel where I have spent most time , this trip, alone working, and yet I have never felt lonely.  I know that Carlo and Danitza are at the end of the phone and the gardeners and room staff walk by from time to time, always with a “buona giornata!” 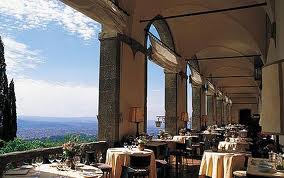 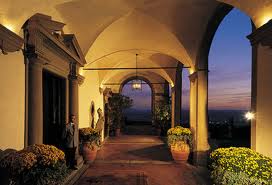 I have often thought, during these past few days, of the English who came to Italy on their Grand Tour, settling in Ravello or Positano, in Rome, Venice or Florence for two and three months at a time to paint or write or soak up the Italian sun for their nerves!  In these last days of summer, when the sky is truly cerulean and the sun still carries warmth in its rays, I cannot imagine anything more tempting than to sit on my terrace at the Villa, serenaded by the birds, overlooking the Medici’s great city, and to write.