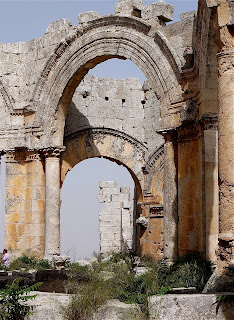 When Rome was built in 750 BC, Aleppo was already 2500 years old.
UNESCO has registered Aleppo as a human heritage site along with other cities like Florence, Pamukkale and Cairo.  It is also a World Heritage Site: its walls being the best-preserved in the Middle East after those of Jerusalem; its Citadel – the wold’s largest – never having been captured in its long history; its location on the Silk Route endowing it with a the record number of 69 caravansaries,still in use in the Old City.  With its important museum containing a world-class collection of artifacts from theEuphrates River region, Aleppo also houses the Middle East’s second largest Christian community after Beirut and in its immediate region is the first historical Christian church, St. Simeon Cathedral (photo above).
Not only does Aleppo have the oldest continuously inhabited house in the Middle East (since the 15th century), it is also said to be the oldest continuously inhabited city in the world (there are others about which this is said, Damascus among them.)
Ancient, Aleppo does not disappoint in the dead of night or in the heat of day.  Built almost entirely of limestone, the massive walls, paving blocks and soaring cupolas look ancient, feel ancient, in fact, are ancient.   I am challenged by numbers and, even though I have a wonderfully knowledgeable guide, I am unable to keep my periods, eras, empires,wars, movements, uprisings clearly demarcated.  I can only  do ancient — and it all seems so ancient — and what came after. 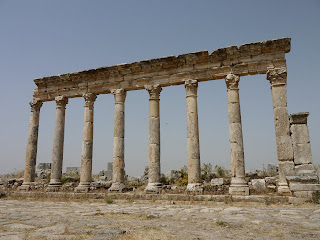 The sites of Syria – Aleppo’s Citadel, St. Simeon, the exquisite and extraordinarily well preserved ruins of Afamya, the theatre of Palmyra, Krak des Chevaliers, Damascus’ Umayed Mosque among countless others unearthed and even more tels still to be exposed – are hugely important in the historical timeline of the Middle East as well as in the religious, cultural and art history of the West.  How many times did my sister and I look at each other amazed to hear that a period in Syria’s artistic expression had preceded by hundreds of years that same expression in Europe.  Our Eurocentricity, at times,  is embarrassing.  It is evident to us that travel to Syria is as much about experiencing the other side of the cultural and political coin as it is about seeing its extraordinary archaeological and historical sites.