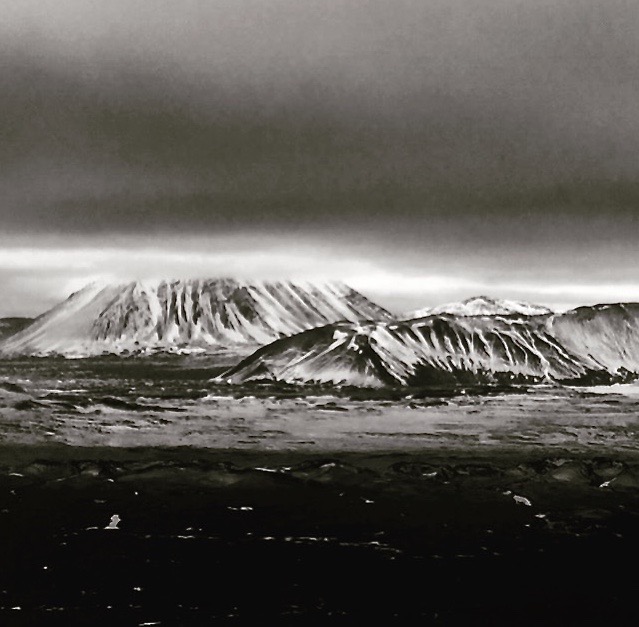 New York-Rejkyavik is a mere 4h37m, a remarkably short time in which to travel to a virtual moon.

We all know that NASA sent its astronauts to practice their moon landing walks in Iceland’s northern lava fields, but that does not prepare you for the stunning beauty of the country, the diversity of its landscapes, the sounds of roaring mud pots and erupting geysers, the omnipresent smell of money – and by that I mean the smell of sulfur and fish.  Iceland, the world’s oldest democracy, is a country that, in spite of a roiling underworld and a lashing sea, has thrived on fishing, farming and the harnessing of its geothermal power. 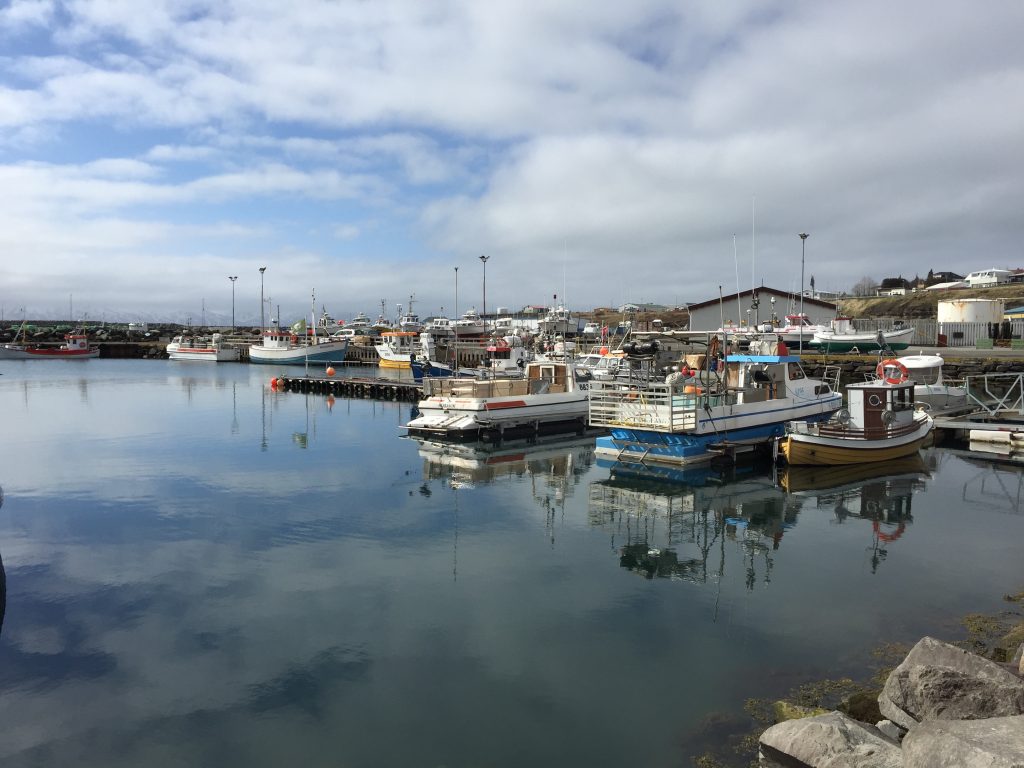 Husavik Port from which to search for humpbacks and, most importantly, blue whales

Iceland is an adventurers’ destination, a perfect place to spend a long weekend in summer or in winter if you love the out-of-doors.  From cross country skiing and paragliding to ice climbing, river rafting and ATVing, the island – which is the size of Kentucky – is a giant playground for those who love nature as well as adrenaline pumping activities.  Nature is pristine here and, in spite of the fact that  Icelandic tours mostly concentrate in the Golden Circle of the South, super jeeps, four wheel trucks, snowmobiles, fixed wing planes and helicopters can whisk you in to hardly accessible canyons, land you on ice caps, deposit you on salmon-rich rivers and arctic char-filled lakes, and drop you down the gullet of an extinct volcano into a glorious magma chamber. 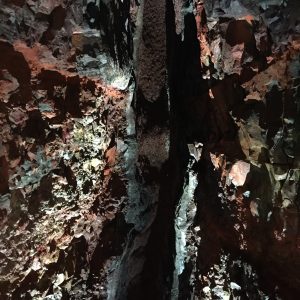 Tethered to the railing of an open elevator, 6 of us climb into the cable suspended conveyance and descend slowly, 200 meters into the throat of Thrihnukagigur, the Three Summit, volcano.  The narrow passage gradually opens into the wide belly of the mountain and we land, gentle as the Apollo Lunar module, on to the volcanic floor. 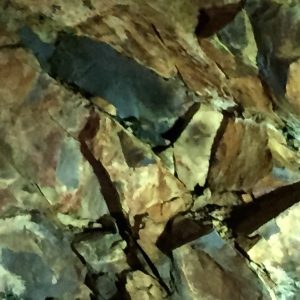 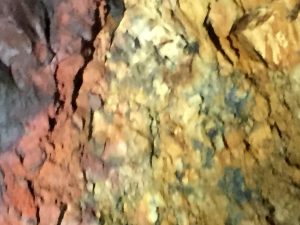 rock walls of the magma chamber

Strategically floodlit, we are inside a cathedral, walls soaring above us painted the colors of gemstones. A fine rain, filtering for three years through the porous earth above, drops like rhinestones to the crater floor. 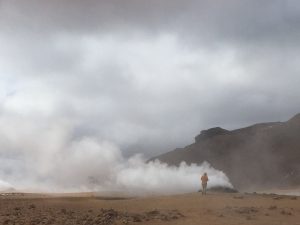 mud pots and vents in Myvatn

The smell of sulfur is omnipresent in the island’s interior where geysers blow, mud pots boil, and vapor snakes through earth cracks.  The innards of Iceland are roiling; muscular, young, impatient, this as an island that is still becoming. From the lava flows to the vents, the wind blown field furrows to the ice floes, this restless world wears its history on its face. 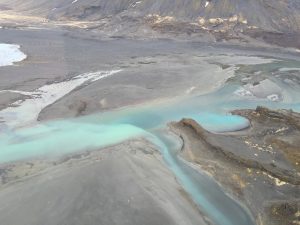 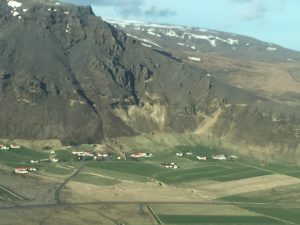 Traditionally a country of fishermen and farmers, the strength of the Icelanders comes from knowing that anything is possible at any time

It’s a narrow band of very fertile soil in the south, sandwiched between ocean and fire and ice, that gives farmers their livelihood.  There is always a tension, however, a kind of waiting for the earth to pull its punches.  “We are defined by our island and our weather,” Gummi tells me.  “We expect anything at any time.”

This sentiment is beautifully expressed by Iceland’s Nobel Prize winning writer, Halldor Laxness in Christianity At Glacier. (It is interesting to me that Icelanders, as a people, are committed readers and writers.  There are but 330,000 of them but, I am told, there is always a book in the  hand and penchant for writing stories.) Laxness writes:

“May 11; the last day of the winter-fishing season. It’s the time of year called ‘between hay and grass,’ looked at from the sheep’s point of view;the time when the hay is finished and the grass not yet started to grow. It’s often a weary time for ruminants; indeed, spring has always been the season in Iceland when animals and people perish.”

Restless and fragile; pragmatic and superstitious; fire and ice.  This is a land of contrasts and, as with all things black and white, it is in the gray interstice that you will uncover finer meaning.  For that, it will take far longer than a long weekend, of course, but it is well worth taking that first step.