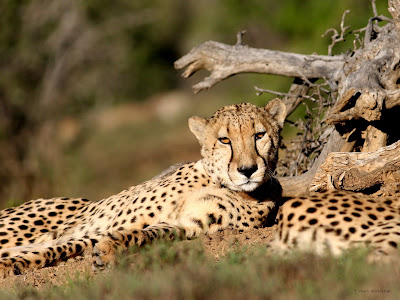 In 1972 I lived in the Serengeti National Park for 18 months making a television documentary on the life cycle of the cheetah.  Yesterday, at Samara Private Game Reserve in South Africa’s Keroo, I walked through thicket to stand 50 feet from a wild cheetah, Sibella.
Sibella is a remarkable animal.  Eight years ago she and her sister were rescued and brought to the De Wildt Cheetah Sanctuary with lacerations, cut tendons and wounds through both cheeks.  In time, and after numerous operations, she was released to the owners of Samara Private Game Reserve in the Eastern Cape where she has thrived in the wild, hunting and breeding successfully.  To date she has produced 18 cubs.  These cubs, at maturity, are sent off to De Wildt to have their DNA analyzed and, in turn, to be sent to other game reserves in South Africa to strengthen the cheetah gene pool.  Standing in front of Sibella, large and magnificent, feels like something of a miracle.
www.dewildt.co.za