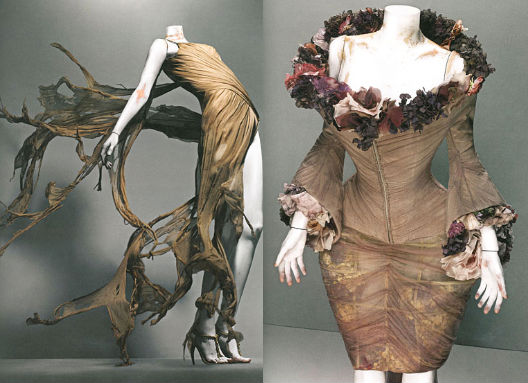 Monday, UES Fifth Avenue traffic was in a rat’s nest; red carpet and white tents were being unfurled and erected at the Met Museum for the opening of the Alexander McQueen show, Savage Beauty. All the bloods were there, and my sister, Annie, a former editor of Vogue, jewelry designer ( http://www.shellbound.co.uk/) and eye extraordinaire, would have been there too, except that she had flown over from London to help me care for our aging mother who recently broke her hip at the Whitney Museum steps (she’s no slouch either!)

Tuesday, we grabbed an hour and ran to the show.  What a show and what company, for me, to be in!  I had never been to a McQueen fashion show and was only aware of those strange shoes and the suddenness and sadness of his death.

Anne was the perfect companion.  She guided me through the show, pointing out with her unerring eye, the brilliance of the designer.  His early years set him up for the rigors of cutting; the latter years saw the florescence of his incredible curiosity and imagination.  “How exciting,” my sis kept exclaiming, “to be in the presence of so much creativity and imagination!”  Shaun Leane and Philip Treacy (who Annie had befriended as he graduated from art school) were the co-creators and, indeed, the Met show is a triumph of the alternative.  Brilliance is on display here.  Forget those who snigger, “I wouldn’t wear that!”  Not the point.  This is performance grounded in intelligence, passion, commitment.  It is a privelege to see.

I’m only sorry you cannot see it with my sister. 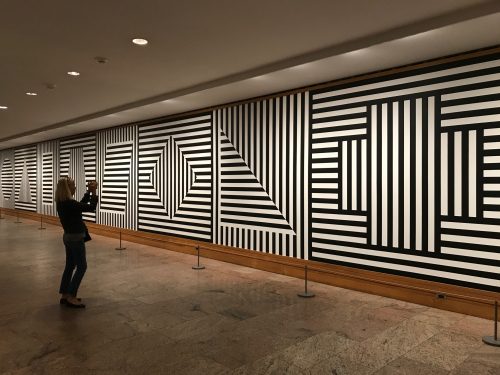 Sol LeWitt's wall[/caption] Friday evening, the end of a week of work,  good work that I enjoy. Yet planning travel for people is work of a specific kind that demands constant dialogue and a focus that must grasp and assemble an endless array of details.  It is tiring, that micro focus, and a steady diet of it leaves me often feeling like I am toiling in a room with small windows. And so, as quickly as I can on Friday, I close up shop and take myself off to experience something beautiful, interesting, or challenging at one of the many museums that neighbor my office.  The Metropolitan Museum is a familiar favorite whose marble halls I have walked since childhood. The temporal and geographical scope of its permanent collections is breathtaking, and the current exhibitions always a marvel of creativity.  I could spend the rest of my life mining the Met's riches, giving myself an education that no university could match.  And it would also take care of my travel, transporting me to places and times I have only dreamed of. [caption id="attachment_8246" align="alignleft" width="315"] 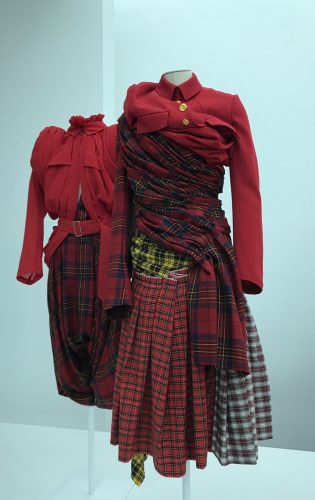 Rei Kawakubo: The Art of the In-Between[/caption] 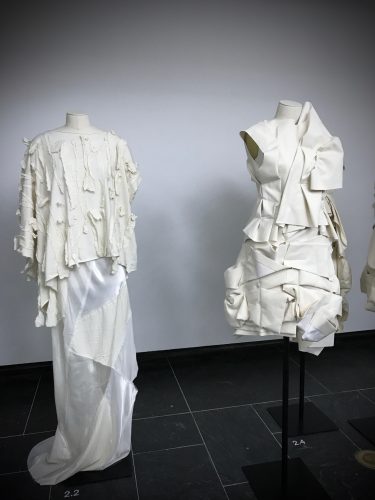