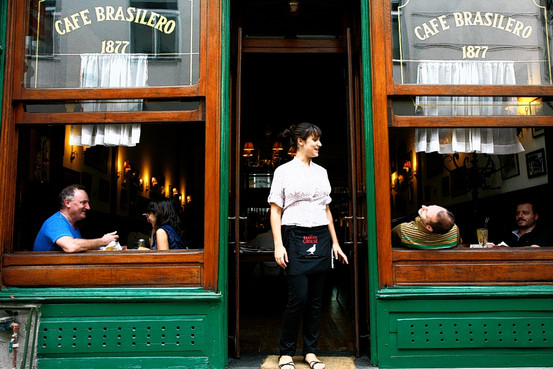 I don’t usually reprint other people’s articles, and I rarely write about the same place more than once.  Montevideo, however, is a city that has gotten under my skin. It is my port of entry when I visit my home in Garzon and, when possible, I stop over for a night or two.   I have always liked the Old Town, as grungy and poor as it is.  Today, it is on the road to gentrification,  “cleaning up nice”, as they say, but it  still has a long way to go before it becomes another Buenos Aires.  It’s funny…BA has great old world charm when compared to Manhattan, and people are lyrical about the mix of cultures and the overlay of Paris on its South American core.  But MVD makes BA look slick and shiny, and that is it’s enormous charm.  It takes you back to the early 20th century and, when I think of it, it is in black and white that I see it – or in sepia.

Here, from Katy McLaughlin of the Wall Street Journal, her own, tender view of the city.

Finally, Montevideo is having its moment.

For years Uruguay—a dictatorship into the 1980s, hit by a devastating financial crisis in 2002—was a place people left. But international demand for staples like rice, beef and soy has turned around the economy, and the tide of immigration. Placing fourth in the 2010 World Cup injected euphoria into a long-cynical country. Now there’s fresh energy and a construction explosion in Montevideo, home to half of Uruguay’s tiny population of 3.5 million.

Hipster bars are opening; the Old Town, often a movie stand-in for Havana, is gentrifying. There’s an abundance of creative talent, including Jorge Drexler, whose gentle “Al Otro Lado del Río” made him the first Uruguayan to win an Academy Award, for best original song; chef Gastón Yelicich and Chiara Deffémenis and Florencia Lecueder, the designers behind the fashion brand K Bardot.

Globe-trotters are discovering the charm of this most European city, where the food runs to croissants, pasta and steak; much of the population is of Spanish and Italian descent; and the Beaux-Arts architecture makes it feel as though somewhere on the journey south you made an accidental left turn into Paris or Madrid. Little wonder retiring Americans, Europeans and Argentineans are buying up luxury properties.

Yet just when you think you’re in the heart of the Continent, along comes Uruguay’s impossibly long Carnaval, which runs from late January to mid-March and celebrates the country’s Afro-Uruguayan culture. Drummers wearing big-sleeved costumes pound out the folkloric candombe rhythm, while scantily clad beauties shimmy in the streets.

No matter how much is changing, tradition runs deep in Montevideo: There’s innovative cuisine, but on cobblestone streets under a canopy of trees, countless restaurants still serve classic pasture-fed steak grilled over fragrant wood. And while deejays-of-the-moment dominate nightlife, at shocking hours of the day cafés fill with dignified regulars sipping Scotch while the melodies of old tangos whisper in the breeze.

Essayist, journalist and author of the 1971 “Open Veins of Latin America”; Montevideo resident

Scenic Stroll:The Rambla. The city’s riverfront promenade—it’s an infinite walk of water and sand, the river’s edge, where my legs wander without tiring and words wander in my mind.

Day Drainer: Café Brasilero. The oldest café in the city, which keeps surviving various deaths and will always be my second home, the place where I always find time to waste time. Ituzaingó 1447, 02-917-2035

Side Show: Café Bacacay. It is in front of the Teatro Solís, where at night you eat and drink while contemplating the lights from the theater. Bacacay 1306, bacacay.com.uy

Victory Temple:Centenario Stadium.Where the first World Cup, in 1930, was played—and was won by Uruguay—and where the voices of many euphoric victories and crushing defeats echo to this day. estadiocentenario.com.uy

Art Branch:Museo Nacional de Artes Visuales. Take in surprising works of Uruguayan art between walls of glass that let in the greenery of the surrounding Parque Rodó. Tomás Giribaldi 2283, mnav.gub.uy

Meat Mecca: Mercado del Puerto. Without any doubt, the best place to eat. It’s the heart of bohemian life in Montevideo. In this huge market building, there’s ongoing competition between the restaurants and grilled-meat stands, which forces them to use the best quality products and have cordial, efficient service. Piedras 237, mercadodelpuerto.com.uy

Insider’s Cocktail: Café Roldós. You must order the inevitable “Medio y Medio,” half sparkling white wine, half moscato. It doesn’t taste the same if you drink it anywhere else—the taste of this wine changes the moment you cross the iron doors to the market. Mercado del Puerto, roldos.com.uy

Street Shopping: Feria de Tristán Narvaja. The traditional Sunday open-air market. Antique porcelain, tiles, books and everything you could hope to find in a flea market finds new life in the hands of its next owner. There’s a je ne c’est quoithat makes it so tempting to go every week. In the Cordón neighborhood, on Tristán Narvaja street between Ave. 18 de Julio until La Paz

Wiener Circle: La Pasiva. This chain is my favorite place to eat a hot dog with mustard. I would love to have the recipe for that mustard, which is absolutely incomparable. Ave. 18 de Julio 1350, and other locations, 02-908-7429

Modern Flavor:Isla de Flores 1900. Gastón Yelicich is a chef of precise cooking. You can taste the young spirit of the city in his famous bone marrow with coarse salt and toast. Isla de Flores 1900, 02-410-5188 (this location is open from April to December)

Native Art:Museo Figari. Part of the idiosyncracy of Uruguay. Pedro Figari was a post-Impressionist painter who shows us the life and happiness of the country through his depictions of its dances, architecture and lifestyle. The museum opened only last year. Juan Carlos Gómez 1427, 02-916-7031

Vintage View:Plaza Zabala. It’s the most beautiful plaza, tiny and romantic, with old buildings and trees. Near the Old Town, which in my memory is linked with my childhood and my grandmother’s house. It’s a few blocks from the Mercado del Puerto, so stroll it after lunch. At the intersection of Solís, Alzaibár, Washington and Rincón

Intimate Eats:Estrecho. A tiny bar-restaurant—the name means “narrow”—where you eat at the bar looking into a simple, great kitchen. It’s French food and the menu changes quite often. My favorite dish is the salmon baguette. Sarandí 460, 02-915-6107

Dance-Off: Baar Fun Fun. It’s the place where tango singer Carlos Gardel performed long ago. It opened in 1895. Go on a Friday night to watch and listen to a live tango show. Ciudadela 1229, barfunfun.com

Hometown Spin:La Ronda. It’s tiny, with a beautiful round bar, and they play amazing vinyl, including Uruguayan indie singer-songwriters. Montevideo is like the Seattle of South America—we have a lot of singer-songwriters and an amazing new generation of musicians. Ciudadela 1182, 02-902-6962

Dough Maker:La Negra Tomasa pizzeria. It’s just the most amazing pizza and the chickpea faina is great. You can order the cake underneath the pizza but I order it alongside it. I always order the faina from the edge, the thinnest and crunchiest part. Pedro Bustamante 1165, 02-622-2218