Hegia – The Magic of Arnaud Daguin 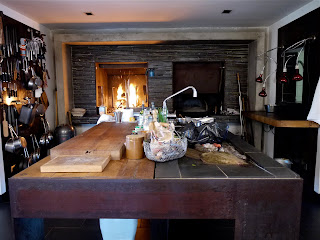 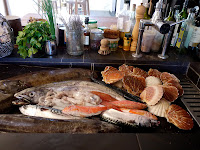 The renowned chef, Arnaud Daguin, is an inheritor of a name and a profession which he has made his own.  Born and raised in Gascogny, the son of Andre Daguin, he and his siblings have 7 generations of chefs in his family.  Years of working for his father and training in Paris, traveling and trying his hand at other occupations and, ultimately, meeting and falling in love with Veronique, his beautiful wife, led him to France’s Southwest, out from under the family’s shadow.  In the 1980’s Arnaud and Veronique opened a 20-cover restaurant in Biarritz called Les Platanes.  It was rewarded by Michelin and became a fixture for years in that seaside town.
Arnaud’s cooking, he happily explains, has three stages:  the buying of the produce; the preparing of the produce; and, finally, a last minute feel for what he would like to cook.  His boned and stuffed poussin are famous as is his poached fois gras.  I had both last night, settled in his kitchen, watching him prepare and then present multiple small plates of delectable creation.
My day started with Arnaud chatting with him while he cleaned halibut, a huge sole, scallops and mackerel.  He then finely sliced white asparagus the size of two thumbs around, the likes of which we rarely see at home, and washed beautiful fresh spinach which he served later with a fois gras made by him.  His delicious food was accompanied by superb  white and red wines from the region that Veronique chose and described carefully.  Music in the background, great food, lively conversation, laughter, a friendly welcome in the heart of Hegia, the Daguin home and charming Maison d’Hote. 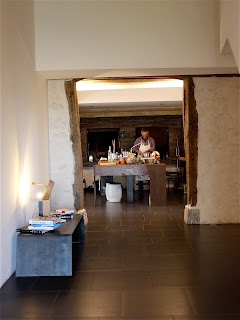