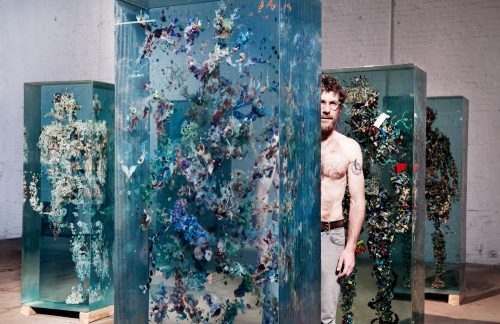 I spent yesterday with Dustin Yellin, arguably one of the most influential contemporary artists around.  His pieces are fascinating – stacked planes of glass, each embellished with images and painting that, when layered atop each other, create collages of staggering dimension and detail.  Many of the finished pieces are massive public installations; the detailed studies for those pieces are dreams, gems, both intellectual and emotional, that rouse memory, create reverie and project you forward into strange – some would say dystopian – visions.  As a traveler and an anthropologist, I was reminded of strange cultures and beautiful artifacts that I have visited, studied, or collected over the years:  New Guinea nose bones; Trobriand kula shell necklaces; bilum bags; fiber skirts.  Yellin’s pieces are riches to dream on and to travel in, and I think every child should have one.

But artist is, by no means, the sum total of this 42-year-old.  A genius with a brain constantly on the move, his art is in service to a larger dream – that of supporting a community of creatives from diverse disciplines to inspire social change. In 2010, Yellin created Pioneer Works, an independent, not-for-profit cultural and educational resource unlike an other traditional institution.  Located in a large 3-story brick warehouse in the Red Hook neighborhood of Brooklyn, Pioneer Works holds public exhibitions, screenings, concerts, readings, as well as lectures and courses on a range of artistic, scientific, and social topics.  Pioneer also awards multiple no-cost arts and science residencies each year.