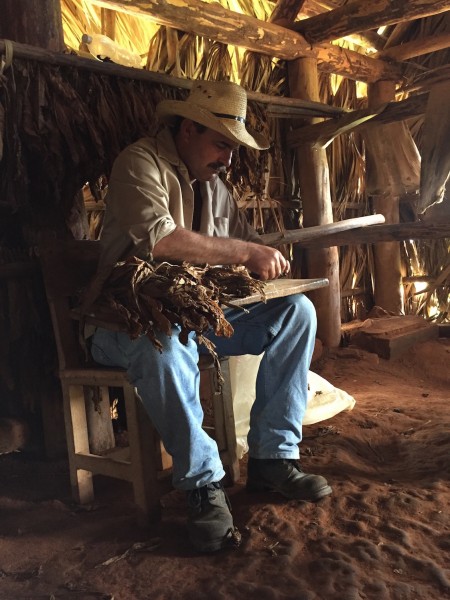 We have had no internet for the last two days on top of which we have been in the car for long hours on each of them.  One thing you have to realize when planning a trip here is that the island is deceptively big;  On Monday, we travelled to the west of the island to Vinales, the tobacco growing region of the country and a wonderful karst landscape that has been incorporated in to a National Park.  There are all manner of hike circuits to be had and one can go horseback riding as well.  But the drive was a good 2.5 hours each way and, with no place to overnight, it becomes difficult to include into an itinerary.  We stopped at the farm of a small-holding tobacco farmer – frankly I bet he makes more money these days meeting tourists and explaining the tobacco growing, rolling and smoking process than producing tobacco leaves – who looked the part:  John Wayne meets Marlboro man with all the bonhomie of a Ronald Reagan.  My takeaway?  If you haven’t ever run your fingers over a tobacco leaf, you must as it is a sensation that is surprisingly delicious.

On our return to Havana we stopped at Julio’s garage and had another of those people to people encounters that are Cuban stunners.  Julio, (looks a bit like Gov. Chris Christie) is as passionate about classic cars as I am about my internet connection at this point in time!  Seriously…he is the son of a garage mechanic with a degree in  electrical engineering. His passion for vintage cars comes from his Dad and started collecting them years back.  He now has a company called Nostalgicars and he has a team of workers who refurbish them meticulously by hand with any material at hand and a huge dose of ingenuity and cretivity.   They are called Frankenstein cars.  He pours over Chevrolet and Oldsmobile catalogues, looking at parts, taking measurements and then reproducing them in his garage with hammers and chisels.  The black Oldsmobile in his driveway was used by John Kerry on the reopening of the American Embassy this past year.  Kindly, he drove us back to our hotel in this divine car to the hotel, and, even in this city chock full of wonderful vintage vehicles, we stopped traffic.

Yesterday was an even longer day.  We were in the car for a full 12 hours split in to two segments of 6..I could have flown to Tokyo and, except for jet lag, was as crippled and edgy as if I had done so by the time we rolled up to our destination last night.  We departed Havana at 5AM in the rain and dark and drove east this time.  We passed horse carts and vintage trucks on a highway that ribboned through rural countryside, green with sugar cane or tobacco and then turned north to the sea and Cayo Santa Maria, our destination.  One of 3000 islands and islets strung along the north coast, Cayo Santa Maria is way out there in the Atlantic yet connected to the mainland by a long causeway that was started back in the Special Period and chugged along for 5 years.  There is an international airport on the cayo for Canadian and European planes laden with tourists but, to date, the area has not developed to the extent expected. The reef is part of Cuba’s pristine Marine National Park and there are miles of white sand that never see a foot print.  After a few hours on the boat scouting the area, we boarded our bus again and drove back another 6 hours to Matanzas and then to Varadero which lies halfway between Santa Maria and Havana.  Matanzas is the third largest city on the island and, as it was dark when we arrived, I didn’t see much (though I will tomorrow when we leave and head back to Havana).  But we did stop to hear a short concert of the Catalonian Chorus in the Ermitage of Montserrat Church. Founded in 1961, this group of 16 youngsters, male and female, travel throughout Cuba and abroad, sharing an eclectic repertoire of music that is mind expanding.  They sang three pieces – two of them by Cuban composers and the third, in our honor, was Oh Shenandoah, an American folk song from the early 19th century.  Their 16 voices, as beautiful individually as they were melded together, made my skin prickle.  I was deeply moved and had to clear my throat to thank the charming gentleman whose baby this chorus is and who conducts these kids with such love.

This morning we gave ourselves a couple of hours to catch up on emails and for me to begin writing to you before heading out to sea to visit  the dolphin research project.  Basically composed of a huge platform enclosing two large swimming holes for two dolphins each, we spent a half hour with Jessica and Nina.  Both in their 20s, they hugged and kissed us and we held on to their fins and swam with them.  Normally I don’t like this kind of interaction with animals and I hate the idea that they are captive, but I don’t know their whole story and, honestly, they seemed to love our belly stroking.  But then, maybe they just loved the fish they got as their reward.    It was a first for me, though, and, as you know, any animal gives me such huge pleasure. 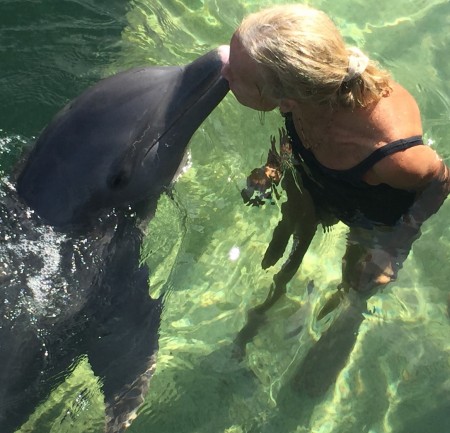