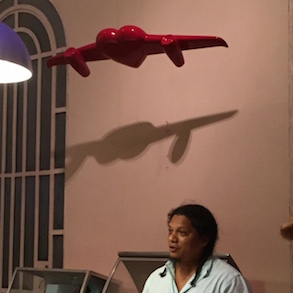 Esterio Segura and his Goodbye My Love

It really is all about sugar.   We started off the day with a walking tour of  Old Havana, a perfectly beautiful old town of 108 blocks with wide cobbled streets and houses generously large to the point of being boastful.  The town was founded in the early 1500’s when Ocampo rounded the channel and stopped at the fort.  Over the years 10 forts were built on both sides of the channel and Havana has in two of them both the largest and the oldest.  Within a 100 years the city had running water – the aqueducts are there for you to see.  By 1537 Cuba had become the stopping off point for all ships arriving and departing the region; Cuba had become the keyhole to the Gulf of Mexico.    The Spaniards thought that sugar cane might be a good crop to grow in the New World and they hit pay dirt with it.  The conditions in Cuba were perfect:  it is a very large island (Cuba in Arawak means big); it has plenty of trees from which they could make firewood to process the sugar in to molasses; they imported a huge labor force to farm the sugar plantations – at one point Cuba’s population was 50% slave, a 1:1 ratio; and they built a railroad.  The latter was the kicker for they had the foresight to move forward with the construction of a railroad that, at one point, was the 6th largest in the world. The rail system allowed them to transfer the sugar from multiple spots in the interior to the coast.  The ships would then ferry the molasses along the Gulf Stream up the North American coast to Rhode Island where it was distilled in to rum and shipped across the Atlantic. Then the ships would return to Cuba with stone as ballast; the cobbles on the streets of Old Havana are from Massachusetts and so, in fact, we are walking on a bit of North America here.  By the end of the 19th century, Cuba was the largest producer of sugar in the world and, after WW!, in what is now called the Fat Cow period, sugar had reached $1 per pound.  The island was flush with cash and people did what people do everywhere when they make money — they display it.  A wealthy class developed – from sugar and tobacco primarily – and large, glorious houses were built.  80% of the houses in Old Havana were built after the 1900’s; until WWII they were designed in the European style and, after the war, the US influence made its way down to the island.  These spotty facts of mine were collected during a walking tour of the old town with a charming retired Cuban architect who moved easily between the hard facts and humorous anecdote.  We ambled along looking at facades, stopped in the square for a cup of coffee, popped in to renovated courtyards, and gazed up at a wonderful stained glass ceiling designed by a woman in the first decade of the 20th century.  It was great fun.

A quick change back at the Saratoga and we went for drinks at the studio of Esterio Segura, perhaps the best known contemporary artist here. Segura, in his mid 40’s, looks almost Hawaiian, with a wide face, braided pigtails, ready smile and bright eyes.  His work is highly critical of Fidel and government policy but, unlike many such protest artists, his work is fine and, for me, strikes the right balance between message and aesthetic.  The first floor of the National Fine Arts Museum is littered with his sculpture and his very well known piece, Goodbye My Love, a flying machine in the shape of a heart, hangs in an edition of 20 or so in the Bank of America office building off New York’s Times Square which you should go and see.  His other work that has garnered huge press are his prints, and corresponding dinner ceramic place setting, called Fidel Making Love to Havana.  I loved being with this man – so gentle, interesting, successful, and so comfortable in his own skin.  Dinner was at Chef Ivan last night, probably the best meal I have had.  Famous for its suckling pig, we all dug in to half a piglet encased in crispy skin.  Quite delicious!  The weather is still wet and we have not yet seen the sun but, somehow, it doesn’t seem to matter. 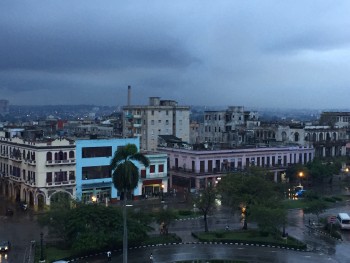 I could get lost here, in this place that is so close and yet so far.

I could lose myself in its story-rich pentimento and in its exuberant, creative potential.

This is a moment, in a place, where the past and the future touch each other.

Easily, and with great sweetness, I am drawn by the kinship that is our history,

and I long for more.