Atika – Knockoff at its Best 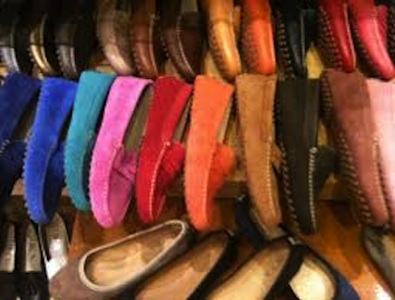 Etched in to my memory of street shopping – be it in Venice, Rome or New York – is the image of tall, West African men tending makeshift tables of leather goods on sidewalks.  There is a nervousness to their body language, a furtive look out of the eye.  When you see the cop car round the corner and the lightening speed with which table, bags and belts magically disappear inside of huge cloth satchels, you understand the situation.

These are all illegal knockoffs.

Then how does Atika, everyone’s favorite shoe shop in Marrakech, get away with selling their staggering array of Tod’s look-alike driving shoes and Hermes sandals and handbags with such bold fanfare.  For this shop, located in Gueliz’s Rue de la Liberte, is mobbed from its opening hour at 8:30 until closing time at dusk (they are closed, like all shops here, during the midday hours).  This year, the year of the ballet shoe, there is an added line of softer than butter, rainbow colored ballet flats as well as Chanel inspired frayed cloth ones.  All so pretty, and all very reasonable. 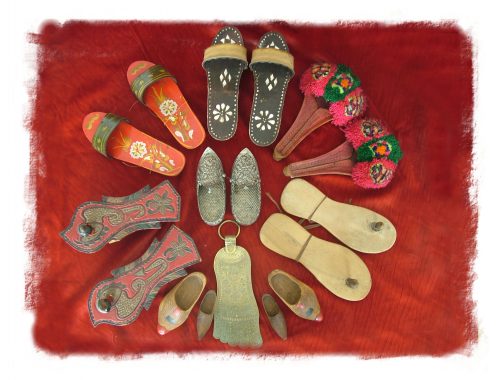 I have a collection of shoes gathered over the course of many years from around the world. They are exotic, beautiful, charming, odd. That is part of their appeal, but they have a deeper meaning for me. They are a reminder that man was, originally, a walker.  Long before he settled in the Fertile Crescent and began domesticating plants and animals, long before he built dwellings anchored in the earth, long before he began HIS collections – of things and of money – he moved from pasture to pasture, from highland to lowland, across sand and snow, hunting, gathering and, eventually, herding, leaving nigh a footprint on the land.

The Nomad, Rimbaud’s man with soles of wind; the Traveler, restless and curious, devouring the earth.